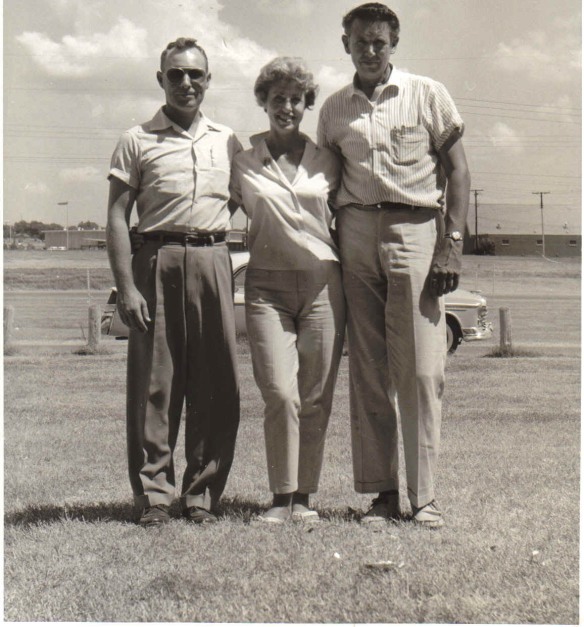 To Go This Far Was Beyond Our Dreams
by: NHRA Advisor Howard Deshazo
QUOTE FROM AN ARTICLE I WAS PLEASED TO WRITE FOR HOT ROD MAGAZINE, JANUARY 1958:
” On November 5, 1956, at a meeting of the new Big Spring Lions Club, Capt. R. O. Franz, then stationed at Webb Air Force Base, moved that “A Drag Strip For Big Spring” be adopted as the club’s “project of the month.” From that point on, things happened fast. Less than 55 days later Big Spring had its first full-fledged drag event, backed by every civic organization in the city and sanctioned by NHRA. 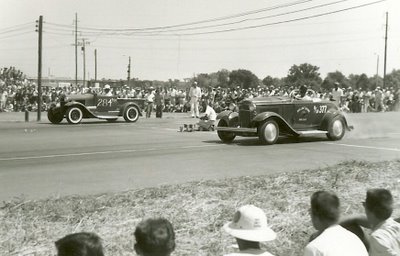 Roster of the initial meeting of the new drag strip committee looked like a Who’s Who of Big Spring, with a District Attorney, Judge, State Representative, News Editor, City Commissioner, Bank President, YMCA Secretary, School Principal, Physicians, Auto Dealers, Refinery President, and the Commander of the local Air Force Base who held the key to the whole project — a potential strip site. “

I stepped into a “Lions” den and came out a winner with the support of all those great people.
The article in Hot Rod put Big Spring, Texas and drag racing in the desert on the map. We had visitors from out of the oilfields of Western Texas and cities from the Eastern border as well. We used the timing unit to hold drags in towns so small no one would ever believe could have happened. Out of the association of members of Hot Rod magazine, Wally Parks being the Editor, led to my being appointed an NHRA Advisor for the area. 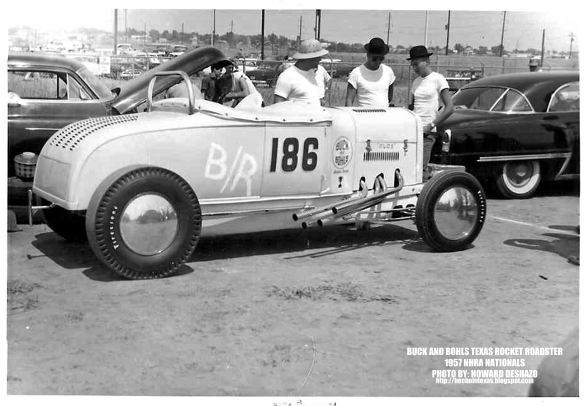 The association had already one national drag competition in Caddo Mills, Texas. This was 1954 and the top speed eliminator did the quarter mile in an astounding 98.8 MPH. Man, that was fast? I remembered that drag competition and right away I wanted more than ever to get involved with drag racing. Two and a half years later I was managing the only drag strip in the western part of Texas. Not only that, I was now a “NHRA Advisor” for that area.
There were a few of us older guys (25 – we thought that was old) who got together and formed a car club. From that meager beginning -a Drag Strip. We got it started and the young guys (16/17) that hung around us picked it up helped us just do it! I look at these pictures and I still see them as they were then — however — these guys got older and still are pushing me right ahead of them.

The two auto-clubs in Big Spring set it all in motion and provided the hard work to make it work – the “Aces Auto Club” and the “Tappet Tickers.” These guys ranged in age from 17 years to 30 years and performed like a professional crew as good as you might find. Hours of work in the hot, dry plains of West Texas. I wish I could name all of them, however, I can’t but I sure remember their faces. They made it happen
I’m not sure that I ever found a group of people from a small West Texas town as eager to help as these. Without them my dream, theirs also, would never have materialized. We brought Drag Racing to a place named after a spring, a spring that had been dry for a hundred years.The people of this town were willing to let us give it a try. They helped by turning out to watch what we were doing and paid to do it. I will, and I know the guys that were with me, be forever grateful. 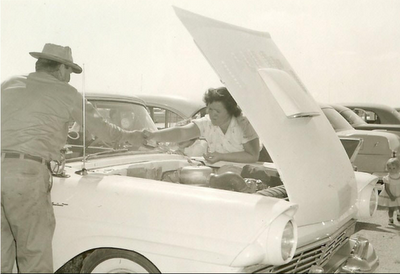 All this while I was talking to Wally Parks. Back in those days he was just about the whole office and was easy to get hold of him,. Actually, I think he and the Hotrod Magazine staff were all in the same small building. I kept sending him photos of what we had done and one of the guys (forget his name) on the Hot rod mag staff got interested. He asked that I write a story about all of the happenings. Of course, not being a writer, I simply wrote a letter telling him all of the details. He simply edited it and put my name on it. Ha!

I met a gentlemen who was quite prominent in the oil business there and had quite an influence over the towns fathers. He simply got interested and with his friends helped out in getting the first drag strip organized. We advertised via letters and phone far ahead of the first drag and we were simply overwhelmed at the response. We used flags for start and time watches for times, etc. We made enough money on that first drag to purchase scales, electronic timing equipment and other item.

I designed, a local oil jobber Ted Grobel provided the funds and workman for, and built the first mobile timing unit ever from scratch just for drag racing, perhaps anywhere in the country. A mobile generator provided the power to run the timing equipment, the P. A. system and the air-conditioning. We could set up in a lonely, isolated spot (we did many times) and provide accurate measurements of speed in the quarter mile with our newly purchased Chrondek® timing system. The unit was first built with a flat front, however, on trial runs it was found that the old 1949 Ford Delivery van with a flathead V8 – simply couldn’t compete with the wind drag. Back to the shop provided a “V” front which eliminated that problem and allowed for air-conditioning and the ability to cruise in the wind. Somehow, with the help of Ted Grobel, we gained the support of the City Of Big Spring, it’s people, businesses, the U. S. Air Force and brought drag racing to the sands of West Texas.

RIP my good friend -2010.
We had a great time in detailing this section of your life for everyone to enjoy once again..